And around the aggressor turn the alterations of misfortune

All praises are due to Allah and peace and blessings be upon the messenger of Allah (SalAllahu Alayhi wa Selam) and all of his companions, as for what comes forth:

The Jihaad in Shaam passed through many stages in which Hayat Tahrir Shaam was active in its events and the arena and fronts can testify to this, and we were the first to expose the internal schemes and dealt with them with wisdom and power. The days confirmed the truth of our views in many of the incidents for which many people accused us at the time. We mentioned this to show that the Jihaad in Shaam is a trust on our necks which we will not surrender on a plate due to a shortsighted view or miserable endeavors (Ijtihadaat). Everyone is known with the latest battles east of the railroad in which we were left alone, and the who is calling for the opening of fronts today was completely quite at that time, refusing any call to reconciliation and the formation of a joined operations room. While some of them like Zinki even stabbed us a number of times in the back but we were able to lean towards reconciliation and a ceasefire, except that these people are persistent in their project of fighting against us and the series of assassinating our leaders.

And at a time when the leaders of Zinki are lying about their willingness to resolve the issues in a Sharia court -according their own claims- their treachery, lies and slyness become perfectly clear to the world as their tanks and weapons attack a number of positions in Western Aleppo yesterday on Thursday afternoon (4th of Jumada Al-Akhira 1439 – 20th of February 2018). To start their transgression against Hayat Tahrir Shaam in an inexcusable clear and outright show of transgression and violation. Instead of directing their crowds of men and convoys to the fronts against the criminal regime to open up a military operation to ease the burden on our besieged brothers in Eastern Ghouta. We find their heavy military equipment and machine guns directed to transgress against our basses and members, rather even against the safe-secured civilians in the territories in which we are present, without any preceding initiative from our side. By which it became clear to everyone that the so-called court is nothing but a manipulation and a cover up of their assault, and only something they can use in their media propaganda.

And when those sitting and refraining from the fronts cry over Eastern Ghouta, it is our right to ask where their emotions were the days when the battles were east of the railroad!? And are they able to go beyond the de-escalation zones on which they signed and by which they abide so that the regime could reach Ghouta in Damascus!? How could they while they themselves considered it a treachery and held us responsible for the consequences of the Russian bombings the day we opened a battle front in Hamaa! Indeed, if you do not have any shame then do as you wish.

And this transgression against Hayat Tahrir Shaam is not the first of its kind, rather it came as the latest episode in a long series of repeated transgression and violation from Zinki, for which we had a lot of patience, represented by the following:

1. The previous transgression against our basses and individuals from Hayat Tahrir Shaam in November 2017, as they exploited the preoccupation of the members of Hayat Tahrir Shaam and its Mujahideen repelling the transgression of the criminal regime and the renegade Khawarij on the fronts in Aleppo and Eastern Hamaa. They started with their oppressive transgression against the basses of Hayat Tahrir Shaam and attacked the courthouse in Darat Izzat in rural Western Aleppo which resulted in the killing of the migrant Mujahid Shaykh Abu Mujahid Al-Masri -may Allah accept him- but we leaned towards reconciliation and calmness at that time giving precedence to the interest of the arena, and to repel the danger of the campaign of the criminal regime and its allies which was at its fiercest in rural Hamaa and Idlib.

2. A series of criminal secret operations from spreading IED’s and assassinating leaders and members of Hayat Tahrir Shaam, for they killed one of the members of Hayat Tahrir Shaam in Shaykh Ali, and spread IED’s recently in Darat Izzat which resulted in the killing of a child and a brother got away. Until their terrible crime of killing the professor Shaykh of the Sharia college in the university of Idlib Qasim Al-Huluw -may Allah accept him- as they planted an IED on his car. And then assassinating the general military leader of Aleppo our brother Atiyatullah -may Allah accept him- as the fingers of accusation pointed to the same criminal gang -and the details are still being unraveled and the schemes connected-. And finally killing our brother Abu Ayman Al-Masri -may Allah accept him- the education’s administrator in the department of migrant affairs and the administrator of the Quranic sessions in the refugee camps, including the wounding of his wife who was present with him as she was severely wounded in her spinal cord -we ask Allah to heal her soon-. And this happened after the security gang belonging to Zinki opened fired on his car. This in addition to the daily harassments which the Mubarabitun (frontier guards) are confronted with when they change shifts as their supply lines pass through Zinki territory and their security checkpoints.

The intertwining and complex problems are not solved through formal patching methods and fragile reconciliation meetings from which the transgressor leaves with even a better opportunity to renew his transgression and crimes and escapes the consequences of what his hands have caused. This is why we in Hayat Tahrir Shaam hold the leaders of Zinki completely responsible for all the aforementioned crimes and violations, and we call them to surrender themselves to a Sharia court, at the same time we call upon the soldiers of Zinki to step away from this criminal leadership which seeks to embroil and push them into a conflict in which they do not have any part, and we call upon them to stick to their battle fronts and guarding points against the criminal regime and refrain themselves from any infighting which does not benefit anyone except the enemies of the Ummah. And the Prophet (SalAllahu alayhi wa Selam) said: “Verily, if the people see an oppressor and they do not seize his hand, then Allah will soon send punishment upon all of them.” And in one of the narrations: “Seize the hands of your foolish ones before you are perished.” And we in Hayat Tahrir Shaam stress that we will not stand with idle hands in front of these violations, and we will seize the hand of those who violate and oppress. For the arena in Shaam is prepared for something great and it is closely observed by the eyes of the whole Ummah and they are betting their hearts on it hoping for the victory of Allah and the honoring of His religion. And we will not let the foolish play with this blessed Jihaad after everything it passed through from trails and tribulations and the advanced staged it reached of the Ummah’s revival and the return of its glory and honor.

As for you oh soldiers of Hayat Tahrir Shaam, the events have proved that you are safeguarding the trust of the arena, your Jihaad is based on insight with the Will of Allah without excessiveness or neglectfulness. So persist in your Jihaad and repel the transgression of the rogue aggressors (Bughaat) to preserve the purity (of the Muslims) and protect your blessed Jihaad. Do not be pushed to transgression by their immorality in disputes and their lies, rather deal with the aggressor with which he deserves and their evil will be stopped with the justice of the Sharia. And remember Allah concerning the general Muslims, let them see nothing from you except goodness, and seek patience and glad tidings in the Words of Allah the Almighty: “And those who retaliate to aggression only to the extent of the attack against him, and is then again treacherously attacked, Allah will surely help him. For verily Allah is Mild and Forgiving.”

“And Allah hath full power and control over His affairs; but most among mankind know it not.”

And all praises are due to Allah the Lord of the worlds. 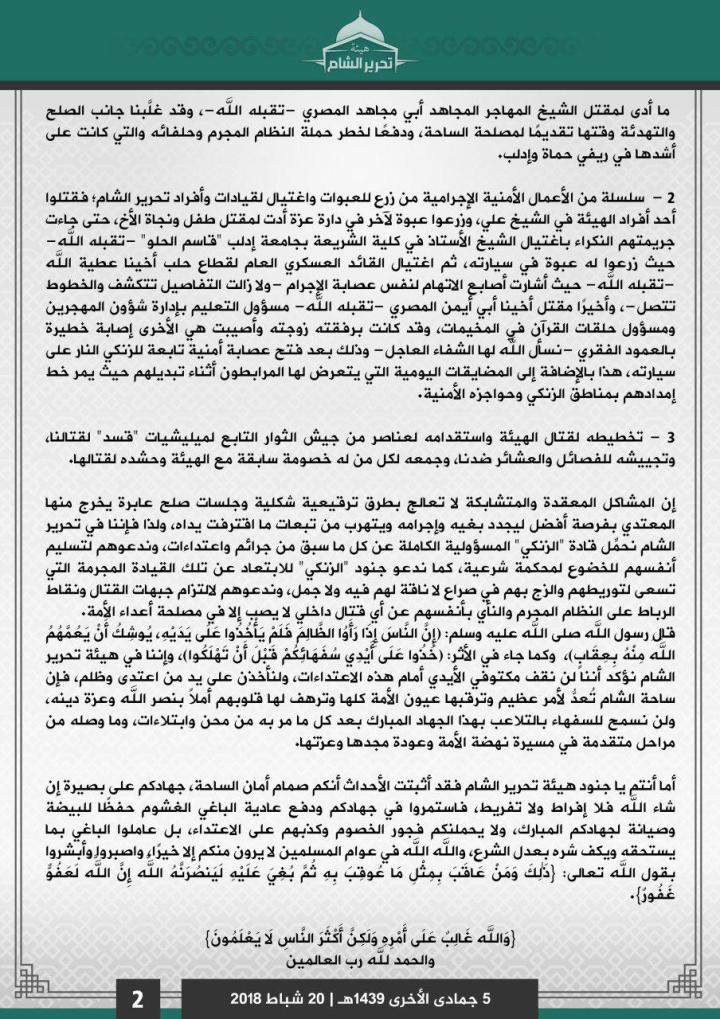